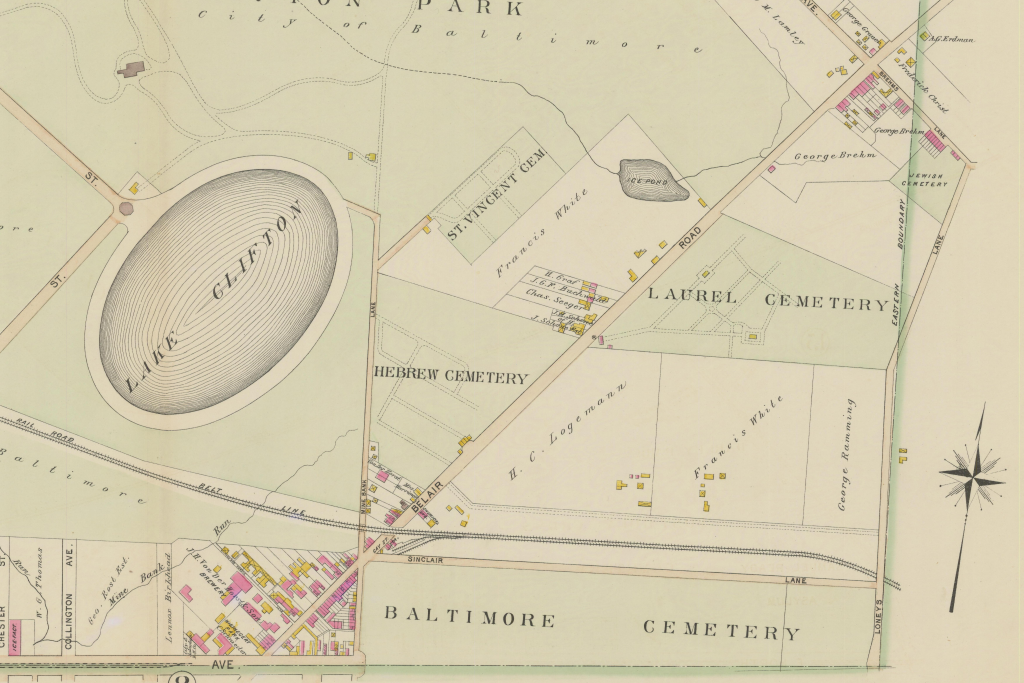 Laurel Cemetery was a non-denominational graveyard modeled on Victorian cemeteries that were designed to be bucolic parks. It was set on the side of a hill with steep inclines on either side, still visible today. Initially the economic, social and religious elite of Baltimore’s Pre-Civil War Free Black community was buried there, although after 1872, Mount Auburn Cemetery on the west side of the city provided competition..

Laurel cemetery, designed by a prominent local architect, was meant to be a place of perpetual care and so it was stated in the ‘deeds’ to each of the lots. Unfortunately the deeds had no legal standing and few of the lot holders were aware that the cemetery had been condemned.. Perpetual care was discarded with reckless abandon when the cemetery was taken for non payment of taxes and sold for a song ($100). With the permission of the legislature it was agreed that the graves and gravestones would be moved to a field in Carroll County owned by one of the new purchasers, while the site of Laurel Cemetery on Belair road was developed as a shopping plaza featuring a Two Guys store. Not all the graves were moved, and today the Carroll County site is a tangle of brush and broken stones where volunteers have documented 815 graves or gravestones..

An account of the loss of the graveyard and the recent archaeological efforts to document it appeared in the British newspaper The Daily Mail in March of 2018:

How at least 5,000 forgotten bodies were left behind when an old cemetery was taped off overnight and bulldozed to make way for a new development

Opening in 1852, Laurel Cemetery served as the resting place for thousands of African-Americans as Baltimore's first non-sectarian graveyard. It was a popular burial ground for several decades, but it fell into disrepair. By the 1950s, residents dumped trash on overgrown property and wanted the cemetery removed because it had become an 'eyesore' . The property owners filed bankruptcy and it was sold off to developers who moved an estimated 300 bodies, despite relatives protesting. But experts say they left at least 5,000 bodies behind to be bulldozed and paved over to create a parking lot and shopping center. Archaeologist Ronald Castanzo found human remains on the property, including the top of a tombstone poking out from a grassy area that was not paved over.

By REGINA F. GRAHAM FOR DAILYMAIL.COM

Parts of the cemetery were sold off for a gas station in the 1920s after an unsuccessful court case to prevent the sale. There is currently a used car lot on the site of the main entrance and administration building. The coordinates 39.317453, -76.578094 lead to a current google map and view of the site.

In a posting on Ancestry.com

juliopkny (View posts) provides an undocumented overview of the story of Laurel Cemetery and points to the pioneering work of Ralph Clayton, who with Alma Moore, provided the first incomplete listing of burials and a well documented history of the death of Laurel Cemetery.

On July 14, 1852 the Laurel Cemetery was incorporated and a charter was filed under the name of "The Laurel Cemetery of Baltimore" on land purchased on Belle Air Avenue (now Gay Street) from a wealthy Land Owner. The land had been used for years as a burial ground for servants of local merchants and land owners including Johns Hopkins. Laurel Cemetery became the first black non-sectarian cemetery for the exclusive use of Blacks.

During the Civil War the Federal Government was faced with the problem of where to bury Black union Veterans with honor. Portions of cemeteries were seized and converted to national cemeteries, in many cases without the consent of the owners. "Laurel Cemetery was no exception. More than 230 Black Civil War veterans were interred in the cemetery between September 1863 and February 1866."

In 1911, while widening Belle Air Road the City, without the permission of the Federal Government disinterred the remains of the Civil War Veterans from the Laurel Cemetery. The remains were re-interred at Loudon National Cemetery on Frederick Road.

Sometime around 1920 a road (Elmely Avenue) was constructed on the southern bounds of Laurel. Not long after the new tenants moved into their homes they began dumping their refuse over their fences into the cemetery. This along with the lack of proper care from the cemetery owners, led to the demise of one of the most beautiful cemeteries the Baltimore area had ever known. Efforts for a solution to Laurel's problems continued for the next four decades.

In a group of legal maneuvers conducted by city law officials and a group of real estate operators who had formed a corporation, to buy the cemetery for themselves. In 1958, aided with the help of legislation initiated by Marvin Mandel, leader of the city delegation to Annapolis, and later governor, the corporation acquired title to the cemetery and through a complex land acquisition purchased Laurel Cemetery for the sum of $100.00.

The corporation then purchased 4 1/2 acres of farmland on Hodges Road in Carroll County renaming it Laurel Cemetery, and supposedly re-interred 200 of the approximately 7,000 bodies believed to have been buried at Laurel Cemetery. Even as the bodies were being removed a funeral was taking place in the cemetery (1957). In 1962 a Two Guys Department Store and parking lot was constructed on the site. A year later the assessed value was $229,660 for the land and $426,000 for improvements. Today Laurel Cemetery is a tangled mass of woods surrounded by a development of expensive homes!

It is the goal of the BAAHGS-Agnes Kane Callum Chapter to resume Ralph Clayton and Alma Moore’s work on the burials at Laurel Cemetery, transcribing and compiling a roster of all burials at Laurel prior to its closure in 1952. The objective is to provide an on-line index of burials similar to that which is available for Mt. Auburn Cemetery. In addition, biographies will be written of those interred in Laurel to the extent that biographical information can be found. In that way the perpetual care that was promised but abandoned by 1952 will be provided virtually and those who were interred there not forgotten.

The magnitude of the task is considerable. Volunteers will have to work their way through about 860,000 images of death certificates on 264 reels of film (MSA CM1132 for 12/1874 through 12./1952). How many burials there were at Laurel remains to be seen, but the most active period will probably prove to be prior to 1920 for which there are 143 reels of death certificate images.

The story of the cemetery and its role in the Black Community is one that deserves such attention, from the graves that were robbed by the caretaker and sold to area medical schools for dissection, to the first race riot in Baltimore County the only victim of which was buried there, to the annual memorial services at the graves of Black Veterans of the Civil war, and to the dedication of monuments to religious leaders such at Bishop Payne at which Frederick Douglass spoke. The lives of those buried there matter and it is time they are resurrected from the oblivion to which a few greedy developers consigned them.

From time to time this posting will be updated with an overview and instructions for volunteers, a progress report, and links to the proposed website that will provide access to biographies and an index to the burials at Laurel Cemetery.

The purpose of this blog is to assist researchers with the transcription of documents in an era when cursive writing is being abandoned and there are few places on the internet where anyone interested in reading the cursive writing of the past can obtain assistance.

In the process of attempting to revive a set of programs I developed for transcribing documents (the defunct ecpclio.net), I have come to the conclusion that volunteer indexers and transcribers, including myself should work through the shared world of Google Mail/Google Drive.  The key is to make it as simple as possible to achieve the desired goal.

It would be best, of course, if the institutions holding the documents to be transcribed/index would host the process, and benefit directly from any transcription./indexing, but that seems less and less likely in a world in which institutions become so protective of their holdings that sharing through the internet is denied, even with collections that once were available in that context.

In any event, as I become involved in transcription and editing projects relating to research I have been and will be conducting, I will explain the projects on this site and offer a means for individuals who would like to participate a home for their transcriptions/indexing.

For those who have already participated in transcription/indexing projects on ecpclio.net, I will be reviving them and posting them here.  This includes all the excellent work done by my students and those at Stevenson University on Baltimore in the War of 1812 and the Civil War that was lost when ecpclio.net was shut down by the  host institution.